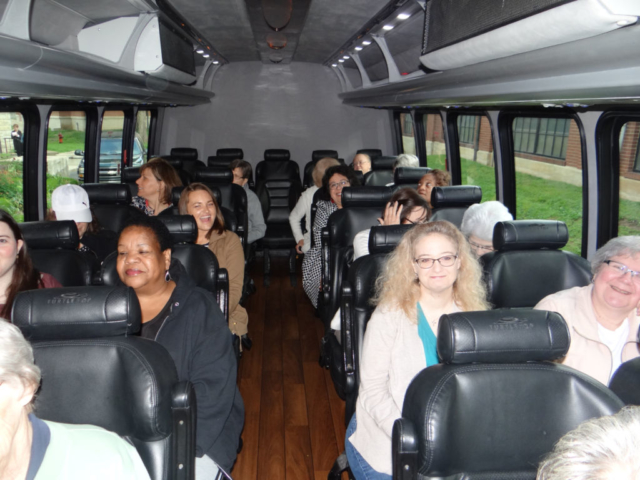 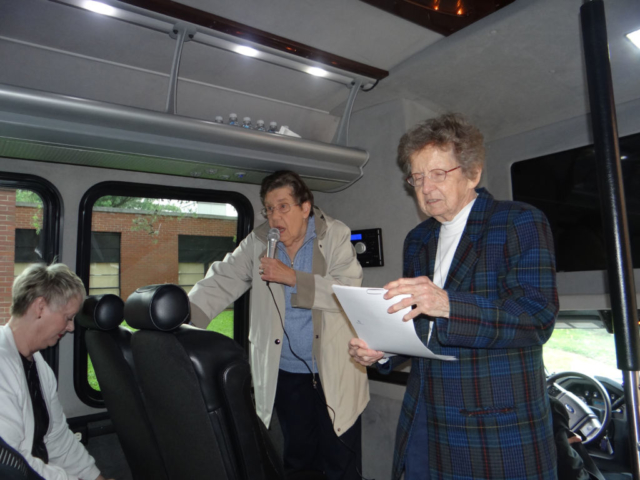 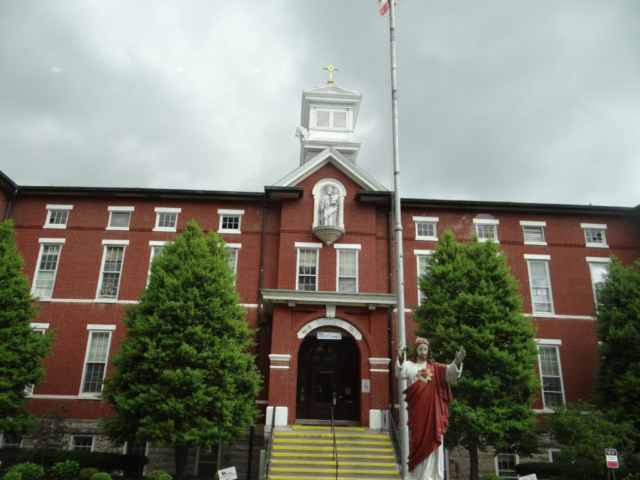 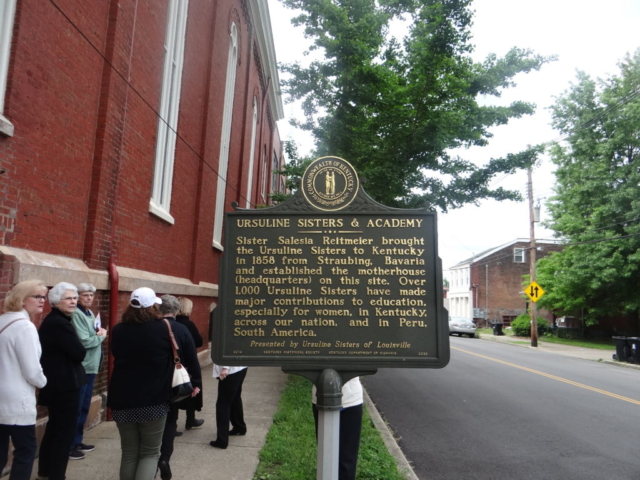 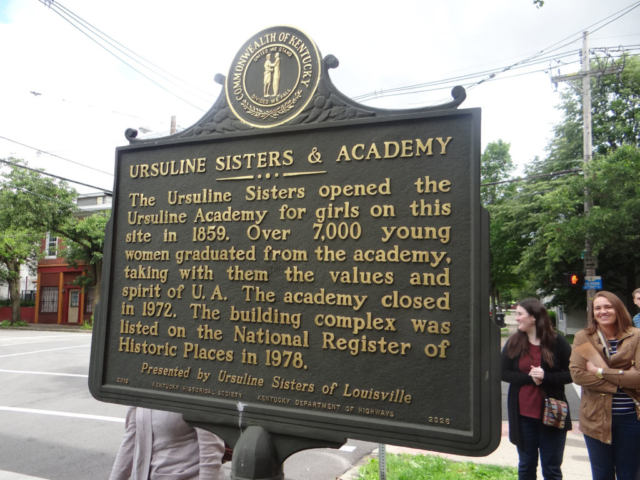 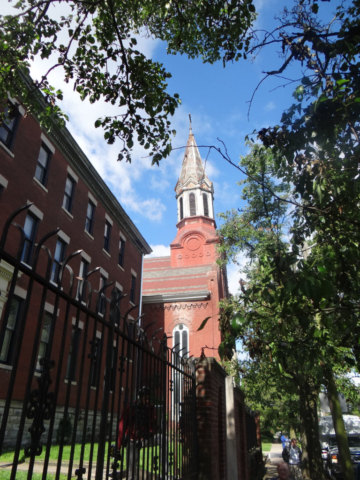 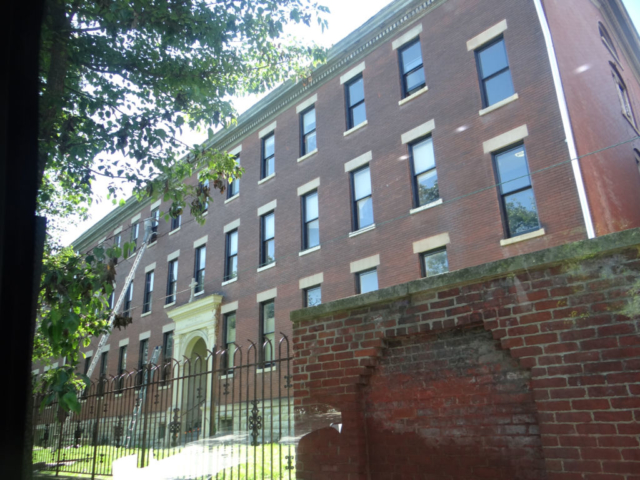 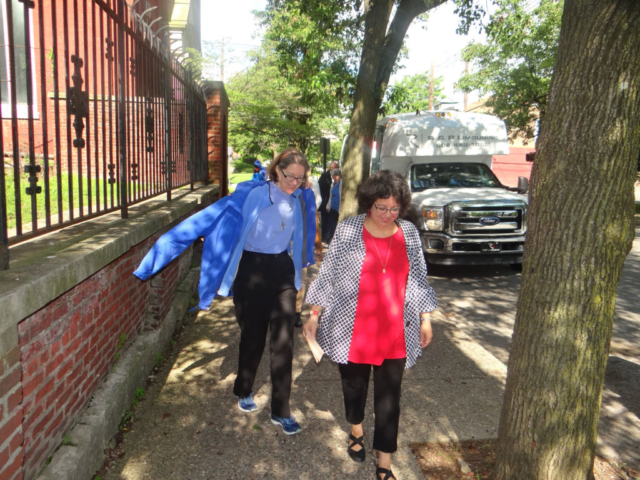 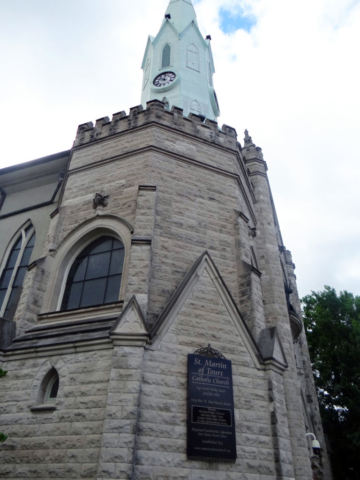 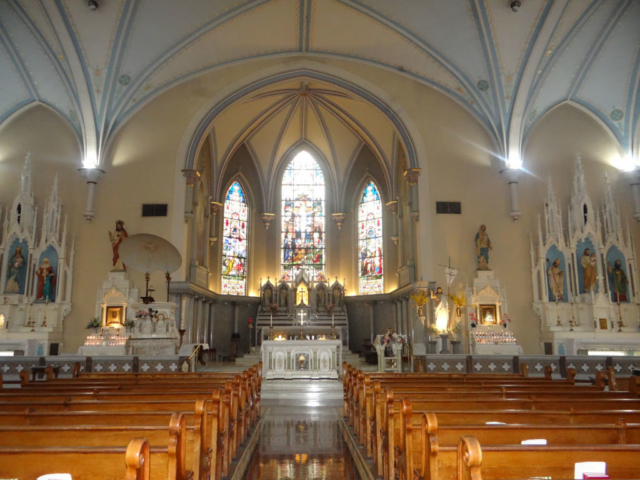 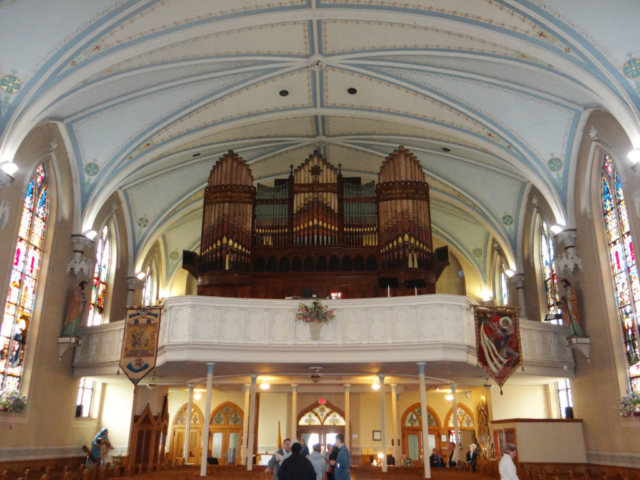 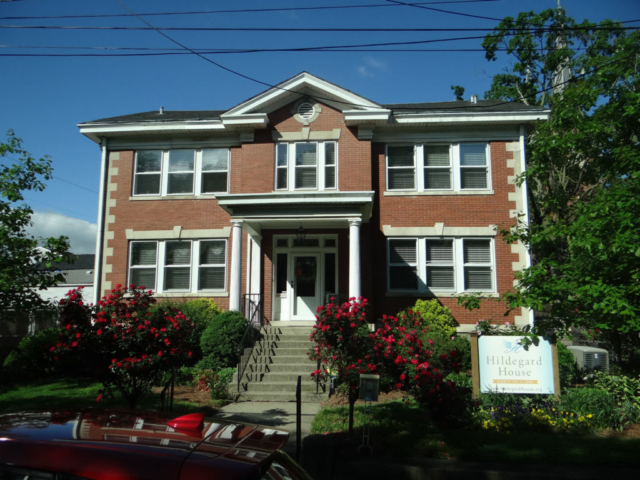 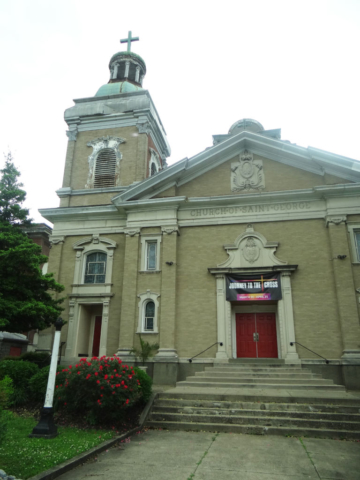 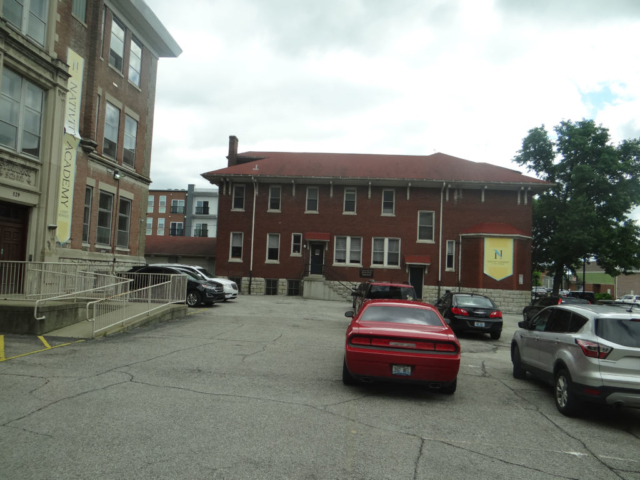 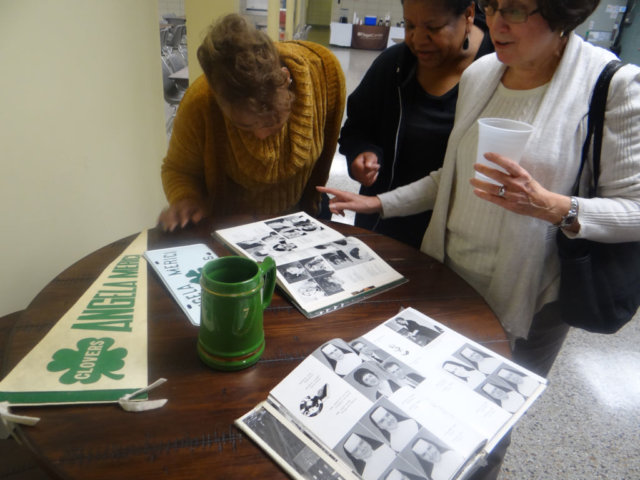 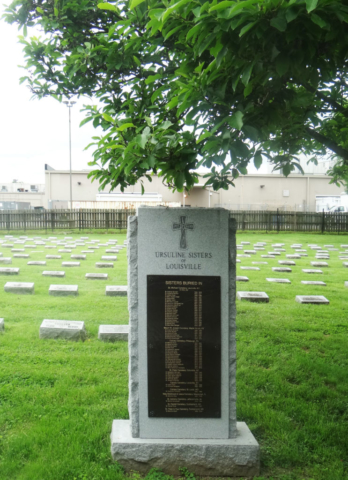 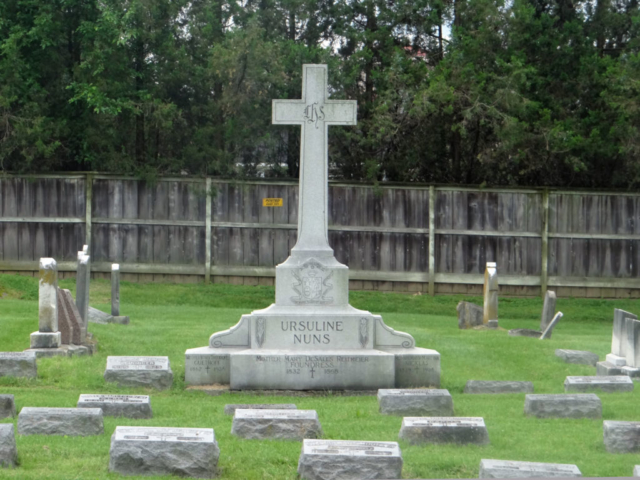 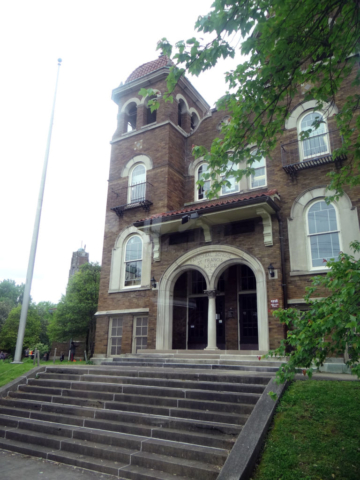 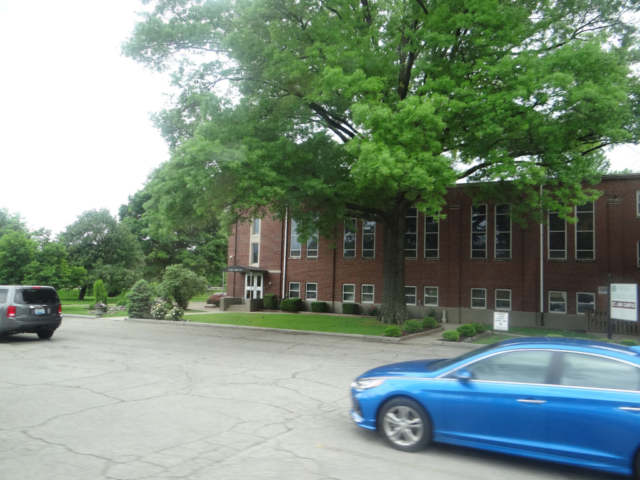 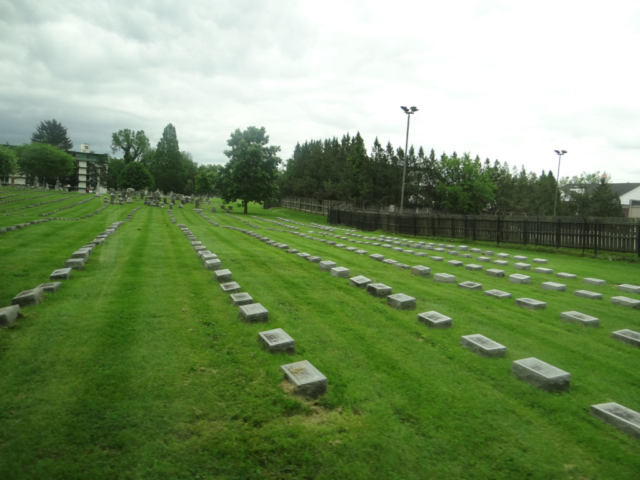 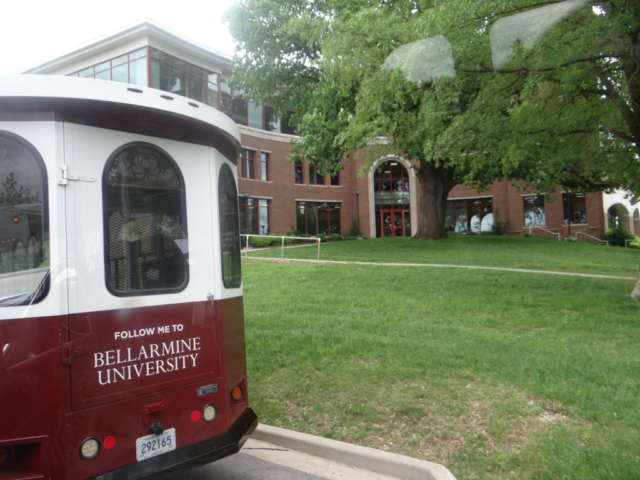 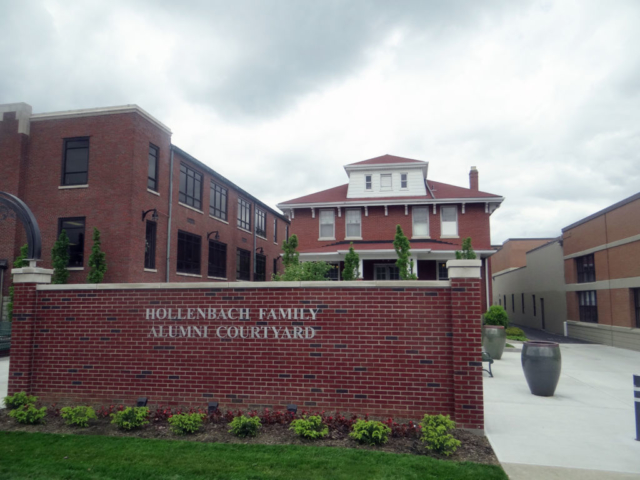 The staff of the Ursuline Sisters of Louisville were treated to a “Heritage Day Tour” on Monday, May 13. They were picked up outside the Motherhouse that morning by a small tour bus, and Sister Martha Jacob and Sister Janet Marie Peterworth served as tour guides. The group visited just a small sample of the sites where the Ursulines have ministered since they arrived in Louisville in 1858.

The tour included a stop at St. Joseph’s Children’s Home, where Ursulines served for over 100 years, beginning in 1897 when fifteen Ursulines arrived to care for 122 orphans following a great cholera epidemic. The last Ursuline there was Sister Loretta Guenther, who retired in 2010.

The group then traveled to Shelby and Chestnut Streets to view the state historical marker that marks the site of the first motherhouse in 1858. The Sisters arrived that year from Bavaria to teach the German children of St. Martin of Tours School, also on Shelby Street. The group toured inside historic St. Martin’s church which is very beautiful. Around the corner from St. Martin’s is the site of the former Ursuline Academy, which the Ursuline Sisters founded in 1859. Ursuline Academy provided education to high school girls until 1972.

St. Michael Cemetery was also a stop on the tour, which allowed the group to view the special marker for the Ursulines in their plot area, where approximately 1,000 Ursulines are buried. St. Francis of Assisi School, Holy Trinity and Holy Spirit Schools were final points on the tour along with Bellarmine University, which has a rich shared history of 50+ years with Ursuline College, which the Ursuline Sisters founded. Bellarmine College for men and Ursuline College for women merged in 1968. The tour ended back at the Motherhouse on Ursuline Campus, also the home of Sacred Heart Schools, a thriving community of four schools serving pre-k through high school that are Ursuline-sponsored schools.

We are pleased to bring you a video series that features a few of our Sisters walking their neighborhoods in love. Wherever they live, the @UrsulinesLou bring #joy and #walkinlove. https://t.co/VdQoTZrFAw https://t.co/3RrHoSZgpq