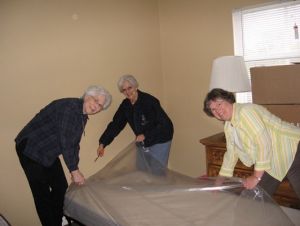 Through the efforts of Catholic Charities Refugee Resettlement ministry and sponsorship from the Ursuline Sisters, a family of eight arrived in Louisville from Pakistan on Friday, April 1 to begin their new life in the United States. Arifa, along with her seven children, one son and six daughters ages 9 to 22, were enthusiastically greeted at the airport then transported to refurbished apartments. It’s been a long journey for the Ibrahimi family, whose application to obtain refugee status started in 1996. About six million Afghan refugees fleeing civil war and violence have fled to Pakistan and Iran, making Afghanistan, the largest refugee-producing country in the world, a title it has held for 32 years. 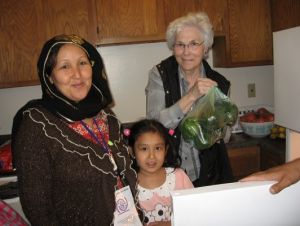 The relocation project initiated through the Ursuline’s Social Concerns Committee was organized and directed by Sr. Ruth Ann Haunz. It took months from notification to preparation to ready a place for the family to live. Cleaning, shopping, pick-up and delivery of furniture, donations of household items and cash, and applying the finishing touches were services performed by numerous Ursuline Sisters, Associates, employees, family and friends.

Volunteer opportunities continue as the family acclimates to their new surroundings. If interested, please contact Sister Ruth Ann Haunz by email or by phone at (502) 777-6656.

@Pontifex: During summer time, let us learn how to take a break, turn off the mobile phone to gaze into the eyes of others, cultivate silence, contemplate nature, regenerate ourselves in dialogue with God. #GospelOfTheDay Mk 6:30-34
h J R
@ursulineslou

@Pontifex: The Lord is aware of all that we have been through in this time. He is close to those who felt isolated and alone, feelings that became more acute during the pandemic. He is not indifferent to this. #IamWithYouAlways
h J R
@ursulineslou