Reflection from the Border

Louisville Ursulines Yuli Oncihuay and Kathy Neely and Toledo Ursuline Carol Reamer lived and worked together for decades in Callao, Peru, just outside of Lima. They reunited to volunteer together for a month-long mission in May at the border in El Paso with the Casa del Refugiado of Annunciation House.

We have received a wonderful reflection and photos from them on their experiences that you can read here: https://bit.ly/2QtQae1 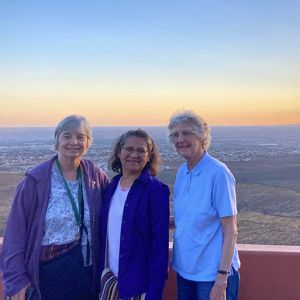 The Gift of Transportation

What happens to the older cars that our Sisters no longer use? For the past couple of years, we have partnered with Big O Tires in St. Matthews of Louisville to donate them to single mothers who are in need of reliable transportation.

Jason Hammons, general manager of Big O, said his own family had donated some vehicles in the past, which inspired his boss, Joe Happel, to get involved with New Life Directions Ministries, a nonprofit that works with single parents to equip them to succeed in life. Jason collaborated with Rick Raderer, our director of campus services, in our donation of two cars to women who are in the New Life program. So, on Saturday, March 27, Kaitlin and Christina, two single moms in the New Life program, thought they were coming to a car maintenance class, but instead were surprised with flowers and two of our donated cars! President Sister Jean Anne Zappa was on hand for the big event and said the two women were very emotional as they received flowers and their cars. We are happy to help these two moms!

Catechesis of the Good Shepherd Program

Sister Mary Jo Gramig has been instrumental in helping to launch a Catechesis of the Good Shepherd (CGS) program with the Sacred Heart Preschool and Model School on our campus. Children in CGS interact with child-size liturgical materials, including altars, chalices, cloths, rosaries and pouring water and “wine” into vessels, using Montessori-based methods. They learn other aspects of Catholic teaching, such as care for creation by holding plants and watering them. Leslie Genuis is the lead teacher and Sister Mary Jo Gramig, OSU, is assistant teacher. We think these photos tell the story of the delight the children take in learning about their faith. As Sofia Cavalletti and Gianna Cobb, the creators of CGS, would remind their teachers to always ask the question, “What face of God is the child telling us he or she needs to see?”

Gathering In-person for Our Spring Meeting!

Our Sisters were able to gather safely at the Mother house this Saturday, April 10 for a spring meeting, thanks to vaccines! President Jean Anne Zappa, OSU reported that, “At our spring gathering we met for the first time since last year. As always we began with prayer and faith sharing, then had a presentation by Ginny Schaeffer, director of the Angela Merici Center for Spirituality, reflecting on the transitions of covid-related experiences. After lunch, leadership gave some updates and asked for feedback from the sisters on some issues. All the Sisters seemed to enjoy being with each other. We were especially happy to see the Sisters from Twinbrook. We also wrote

Bread for the World letters to Rep. John Yarmuth and Sen. McConnell. We also had a report on climate change effects and the Laudato Si five-year plan to respond to climate crisis.”

Our Associates Gather After Fifteen Months

After fifteen long months, approximately thirty of our local Associates who have been vaccinated gathered on May 13, on the feast of the Ascension, for a “Liturgy and Lunch” with Mass in the chapel and lunch in the social room of the Motherhouse. Great fellowship and faith make for a wonderful day.

Laudato Si in action at home and on campus!

Several of our Sisters have literally taken the message of Laudato Si, or Care for the Earth, into their own hands by planting trees and gardens. In April, Sisters Martha Jacob and Janet Marie Peterworth celebrated Earth Day by planting the “farm to table” garden in the raised beds on Motherhouse property. Sister Janet reports, “Peas are in, green onions are trying valiantly to come up and spinach and brussels sprouts have just been put to bed. We women plant, God makes it grow…”

In May, Sisters Rita Ann Wigginton and Carol Curtis planted a dogwood tree at Sister Rita Ann’s home which they had received from Sister Barbara Bir via the Arbor Day Foundation. They also prepared a raised bed for the vegetable garden. Sister Rita Ann is proud of her new rain barrels (nice to have gutters on the garage, as well). “We can’t do everything, but we can do something to care for creation,” Sister Carol said.

Also in Your Midst and Lover of Us All book discussion video series with Sister Martha Buser, OSU

Now available on DVD in both English and with Spanish subtitles!

The Ursuline Sisters of Louisville have produced a video series of Sister Martha Buser, OSU, and friends discussing each chapter from her books Also in Your Midst and Lover of Us All. Available in both English and with Spanish subtitles, they are perfect for incoming Associates, students and others wishing to learn more about Saint Angela Merici.

or mail your check to:

Please note whether you prefer English or Spanish. Please include your name and address.