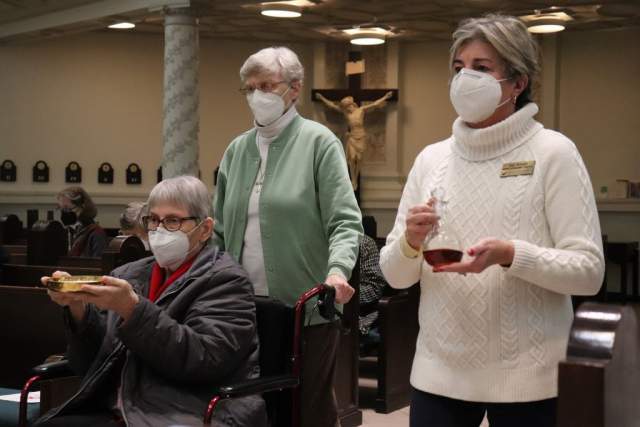 THANK YOU TO OUR WONDERFUL DONORS!

Following the Mass to celebrate St. Angela Merici’s feast day on January 27, 2022, the Ursuline Sisters of Louisville officially transferred the $4.2 million Chapel Preservation Fund to Sacred Heart Schools, which are sponsored by the Ursuline Sisters. Ursuline President Sister Jean Anne Zappa presented Dr. Karen McNay a check for the full amount of the fund, which is donor restricted.

The date of January 27th is significant to both the Ursuline Sisters of Louisville and Sacred Heart Schools as it is the major feast day of St. Angela Merici, foundress of the Ursulines. Sister Jean Anne Zappa reflected, “Saint Angela called us to ‘build community wherever we go.’ We see this gift to Sacred Heart Schools as not just preserving a beautiful and sacred space but living out Angela’s words and charism. Our hearts are nourished as we celebrate and give glory to God together in this chapel, and it leads us to build community with others when we go out to serve in the world.”

A $3.5 million preservation campaign was started in 2017 by the Ursuline Sisters of Louisville to celebrate the centennial of the Ursuline Chapel of the Immaculate Conception, also known as the Motherhouse Chapel, which was dedicated on December 8, 1917. In addition to being a sacred space for the Ursuline Sisters and Sacred Heart Schools, since 1997, the chapel has served the homebound by providing a location where “Mass of the Air” is taped. The Masses are televised on WHAS, WBKI, WNKY and the Faith Channel every Sunday.

This gift builds on the one that the Ursulines gave to Sacred Heart Schools in June 2019: the lease transfer of all buildings and land on the 48-acre Ursuline Campus. Dr. McNay stated that, “Sacred Heart Schools is blessed to carry on the tradition of the Ursuline Sisters and honor their legacy by caring for this sacred place. We are grateful to our Sisters for this gift that ensures our students, faculty, alumnae, and community can worship and celebrate in the Chapel for years to come.”

To date, the following repairs and upgrades have been made to the chapel: new carpet, plaster repairs and painting of the chapel court and protective windows installed over the stained-glass windows of the chapel. The transfer of the fund will allow Sacred Heart Schools to preserve the Motherhouse Chapel on the Ursuline Campus into perpetuity.

@Pontifex: Looking at the Mother of God in glory, we understand that true power is service, that to reign means to love, and that this is the road to Heaven. #Assumption
h J R
@ursulineslou

August Taizé Prayer Please take some time for yourself to pause​​​ and reflect​​​ with our virtual Taizé​​​ prayer​​​ for August. We hope it brings you peace for your journey. Simply click the link below to pray with us! https://t.co/lTuujKepfB
h J R
Follow @ursulineslou